A notice to the clergy in the diocese of Cahors that a letter from Pope Clement VII, dated 15 March 1531, orders the return of property, titles, belongings, and money of Guillaume and Géraud of Figeac, heirs of François Grana, under penalty of excommunication for those who unrightfully retain the property. Part of the letter is torn on the lower right and left sides. 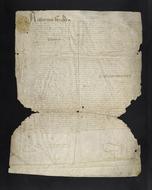 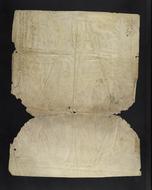