The item is undated and the scribe is not named; likely copied in India, probably in the 18th century.

Copy of a collection of Ḥāfiẓ's poetry with no preface.

Rebound in 1918 by H. Zucker of Philadelphia in red leather with gold tooled spine, turn-ins, border and frame with gold-tooled flowers in the corners and centered along each side between the border and the frame; Hafiz is gold-stamped on the spine; plain brown pastedowns.

Illuminated headpiece in gold with green, purple and blue flowers (p. 2); each page is border-ruled in gold, red, and blue with the page-opening ruled in blue; the columns are divided by double gold rules. 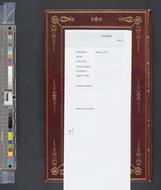