Manuscript leaves from a breviary

Four leaves, not consecutive, from a 14th-century northern Italian breviary. The text is written in 2 columns of 30 lines, with initials alternating between red flourished with blue and blue flourished with red, rubrication in red with blue paragraph marks, and small initials in psalms alternating between red and blue. The leaves have been trimmed to different sizes and one is mounted. The content of the first leaf is lessons from the Book of Daniel and the minor prophets, which would have been read in November; of the second, the end of the sixth through the ninth lesson from Augustine's commentary on the Gospel of John, probably for the fourth Sunday of Lent (the presence of nine lessons suggests a monastic context); of the third, psalms from the end of Psalm 75 through most of Psalm 77; and of the fourth, propers for the feasts of saints in mid-May, including Nereus, Achilleus (here written Archileus), Gordianus, and Epimachus. 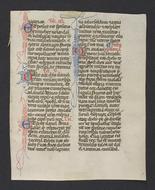 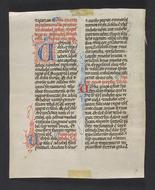