A short vocabulary of the Twaka Indians

English, Tawahka, Cuna, Ulva, and Chocho, with a few words in Miskito and one or two in Garifuna, as well as some notes in Spanish (leaf tipped in, p. 9)

C. Hermann Berendt's transcription of vocabularies of Tawahka (Twaka), and of the San Blas (Cuna) Indians, which were communicated to him by Alexander Henderson. Henderson had received the material many years before from a certain Mr. Haly who had lived among both groups. Berendt's identification of Mr. Haly as the collector of the vocabulary in the title (p. iii) was added in red ink, along with a footnote describing Haly as an English trader who lived for years in Bluefields, Nicaragua, citing E. G. Squier's book Honduras (London, 1870, p. 33). The Tawahka vocabulary comprises the numbers 1 to 20 (p. 1) and 64 words (p. 2-5). The Cuna vocabulary (p. 6-7) includes the numbers 1 to 9, and 13 words. In a preface (p. iii-iv) Berendt reports that Henderson sent him these vocabularies along with notes on the Charib (Karif; today, Garifuna) language. See the folder of loose items shelved with Ms. Coll. 700, Item 127, for Henderson's draft of the vocabularies (on 2 bifolia that also contain notes on Karif), as well as correspondence between Berendt and Henderson (May 1871 to December 1872) making reference to these vocabularies, with Henderson's remarks about Mr. Haly contained in his letter to Berendt of 26 December 1872. In the draft Henderson associates the San Blas Indians with the Mosquito coast; and Berendt adds a note in red ink on the title page (p. iii) indicating that English usage at that time considered that term to include the entire eastern coast from Belize southward to the Chiriqui Lagoon, in Panama. The Tawakha vocabulary includes notes by Berendt that compare some of those words to vocabulary of the Wulwa (Ulva) Indians of Bluefields collected by Julius Fröbel (red ink), and by Paul Lévy (blue ink); and a few notes in pencil that refer to Moskito (Miskito) and Charib. For Berendt's transcriptions of the vocabularies collected by Fröbel and by Lévy, see Ms. Coll. 700, Item 146 and Item 145, respectively. In the Cuna vocabulary, comparisons are made in red ink to vocabulary of the Cholo, or Choco Indians of Darien (Panama and Colombia) published by Edward Cullen; for Berendt's transcription of Cullen's vocabulary, see Ms. Coll. 700, Item 171. Other notes by Berendt (leaf tipped in, p. 9) seem to be an outline for a comparative vocabulary of Tawahka, Ulva and Garifuna (only English words are filled in), with notes in Spanish that mention Lévy and Haly. In a note in red ink at the end of the preface and dated January 1873 (p. iv), Berendt states that he presented these vocabularies in a paper that he expected would be published in the second issue of the Journal of the New York Anthropological Institute. That issue was never published; however, a paper that Berendt read before the American Ethnological Society in November 1873, including this material, was published under the title The Darien languages, in the American Historical Record 3 (1874), p. 54-59. Berendt reports in the article that Haly collected the vocabulary in 1834. 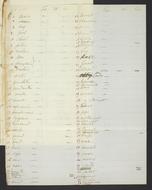 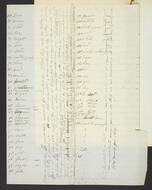 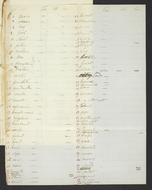 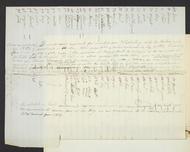