Lower part of a leaf from a large noted breviary with a chant and reading for the Nativity of the Virgin Mary (September 8), possibly from Italy in the 14th or 15th century. Square notation on five-line staves in red ink above texts in rotunda script, with rubrication in red and one decorated initial on each side, blue with red penwork on the recto, red with purple penwork on the verso. Upper edge severely damaged, possibly by fire, with loss of text, ragged edge, and discoloration. 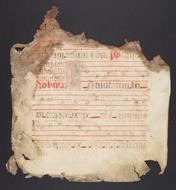 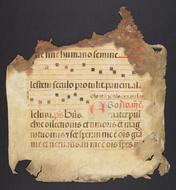