Agreement between Geffrey de Bingham and Johan de Leyk that they will submit their dispute to arbitration by Roger de Seint Andreu and Sir Richard de Wylughby (for Geffrey) and Sir John de Munteny and Nicol de Wyemerpol (for John), and in default, if the arbitrators cannot agree, to Sir William Fitzwilliam. Written in Nottingham and dated 27 September 1316 (the Monday following the feast of Saint Matthew (21 September), the [?] year of the reign of King Edward, son of King Edward the Second, year assigned by Sotheby's). The document states that Geffrey and Johan set their seals to the agreement; the seals do not survive, but one strip of parchment for a seal and a second slit for a strip and seal are at the bottom of the document. The top and right edges of the document are serrated. 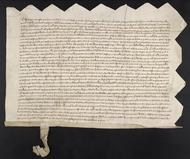 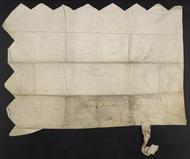