In Latin with extensive rubrics in German

Bifolium from a breviary made in southern Germany in the second half of the 15th century, with the complete text of two columns written in 32 lines on one leaf and loss of text from one column on the other. Readings from the Bible and church fathers such as Augustine and Pope Leo I are in Latin and written in black ink; rubrics are in German and written in red ink. Readings, not continuous, are for Sexagesima and Septuagesima Sunday, the third and second Sundays before Lent, and Quadragesima Sunday, the first Sunday of Lent. 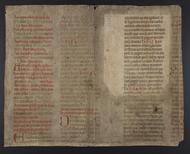 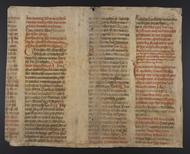