In German, with Latin phrase

Letter from Emperor Rudolf II, with his signature and seal, dated Prague, 18 October 1581, addressed to Johan Vesten, doctor of law and fiscal procurator of the imperial chamber (Camergericht) in Speyer, concerning an exemption proceeding (Exemptionshandlung), apparently for a church or cloister (Gottshaus), possibly in Isen. Rudolf refers to an enclosed copy of his instructions (not extant). The document is also signed by 2 officials, Anselm (Anshelm) von Vels and another by the last name Hoffman, under the rubric: ad mandatum domini electi imperatoris proprium. Originally folded with name and title of addressee, and later notations, on outside. 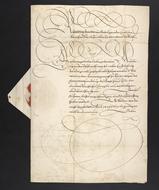 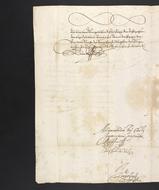 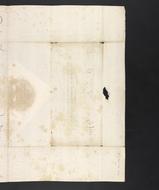 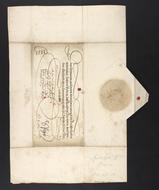