Written in France, in the second half of the 16th century.

A chronicle of the portion of the reign of Charles VII after 1444, with more than half focusing on the last decade of the Hundred Years' War and its conclusion in 1453, followed by an epitaph in verse for Charles VII attributed elsewhere to Simon Gréban and a short ballade.

Paper, 177; two sets of near-contemporary numerals in ink, upper and lower right recto; the upper set is probably earlier, as some of them have been trimmed away. 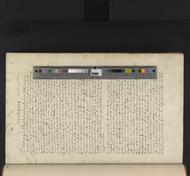