Ledger of debtors and creditors of Fabrizio de' Medici, son of Luigi di Bivigliano de' Medici, for the years 1575-1612. Often includes the nature of a given credit or debt and its amount, as well as listing the names of the individuals that hold the credit or debt. In certain cases debts and credits are in kind (examples of the produce used for these payments are chestnuts, grains, cattle feed, cattle, swine). Notes include personal correspondence of Fabrizio de' Medici regarding the transactions and their payment, among which a letter handwritten by Fabrizio de' Medici in which he promises economic help to an underling whose property was damaged during the earthquake of 1611; a printed document dated 1611 from the Ufficiali de Fiumi della Citta di Firenze; and memoranda of various loans and payments.

Similar to Briquet, Sirene 13894 (Pisa, 1597); and unidentified watermark containing a coat of arms, an eagle and a crescent with rays of light.

Contemporary vellum, no. 18 on spine; the heading Debitori e creditori, no. 87 and letter C with decorative penwork on upper cover; lower cover with remnants of leather ties wraps around upper cover; decorative leatherwork on spine. 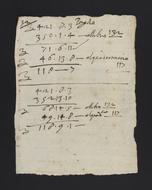 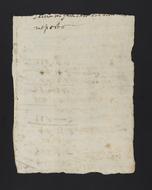 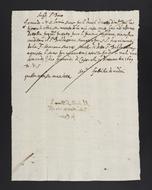 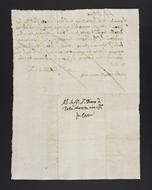 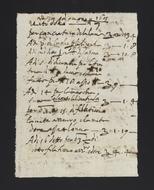 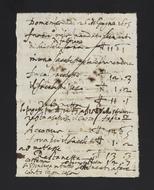