Oversize Ms. Codex 1353 Ledger of debtors and creditors and memoranda

Ledger of debtors and creditors and memoranda

Ledger of debtors and creditors and memoranda of the Ospedale di San Bartolomeo in Trespiano, in the suburbs of Florence, for the years 1567-1590, written by Niccolo de' Medici. He appears to have had a managerial role within the hospital, after purchasing it from the Ospedale degli Innocenti of Florence. The ledger contains a detailed account of the debts and credits related to the hospital. Examples of expenses include: the wages of women who acted as nurses, or various other professional figures such as carpenters and builders; money spent to purchase furniture and accessories or replace old ones; money spent to purchase different products necessary for maintenance of the building (mortar, cement, bricks). Most of the revenues came from the patient fees, or by the rent that locals or pilgrims paid to live in the accommodations (rooms or houses) near the hospital and that were part of the San Bartolomeo hospital estate. The memoranda contain information on the recent history of the hospital and the date when it was purchased by Niccolo dei Medici, 1566. Other memoranda concern the details of small transactions and the reason why they were necessary (examples include paying a carpenter to fix a wall; spending money to buy new linen). In certain cases the first person is used, especially in more narrative passages of the memoranda.

Contemporary vellum, no. 15 on spine; the heading Debitori e creditori e ricordi, no. 191 and letter A with decorative penwork on upper cover; lower cover with remnants of leather ties wraps around upper cover; decorative leatherwork on spine. 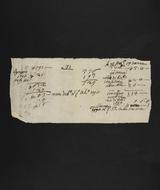 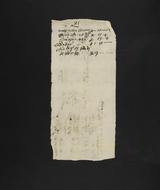 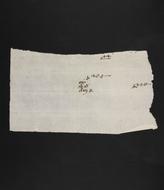 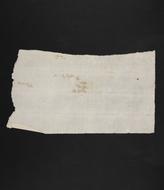