Ledger of debtors and creditors of Andrea di Lorenzo Amadori for the years 1537-1544. Often includes the nature of a given credit or debt and its amount, as well as listing the names of the individuals that hold the debt or credit. Among the names that appear throughout the ledger are Donato di Francesco, Filippo di Lazzaro, Andrea di Domenico Fonci and Marco Giannacci. The transactions concern small debts or credits between Andrea Amadori and various counterparts, but payments to professionals (including dyers, bakers and carpenters) for their services are not uncommon. There are also many transactions between Andrea Amadori and his employees: in these cases the former often pays in cash, whereas the latter tend to pay in kind. The cover of the manuscript is made from an earlier document on parchment written in Latin. A letter from Andrea to Piero Amadori, concerning the payment of a bill of exchange (referred in the letter as lettera di cambio) is laid in the manuscript.

Contemporary vellum, no. 197 on spine; the heading Deb[ito]ri e creditori, no. 1 and letter E on upper cover; lower cover wraps around upper cover with remnants of leather ties. 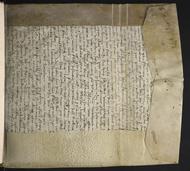 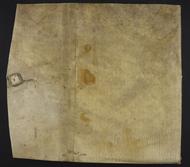