Ledger of miscellaneous accounts for the podere del Colle, located in Poggio alla Croce, a small town outside Florence, probably written by Antonio Montalvo, for the years 1566-1572. The property, recently acquired by Francesco Amadori at the time the manuscript was begun, appears to need extensive renovation. The ledger includes very detailed accounts on the everyday transactions that result from the management and renovation of the farm: examples of such transactions include the purchase of feed for the animals; the expenses required to furnish the house or to replace broken pieces of furniture, or to purchase manure and other fertilizers. Other expenses concern the payment of various workers who help renovate the farm (carpenters, builders, and artisans who make roofing tiles are among those who appear more frequently). In certain cases, there are small sales and purchases between different counterparts, usually involving building or farming materials, and the names that appear more frequently are Francesco di Bastiano, Simone di Cipriano and Stefano di Bartolomeo del Ruta. The cover of the manuscript is made from an earlier document on parchment, dated 1503 and written in Latin. 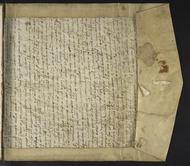