Ledger of Arrigucci debtors and creditors and memoranda

Ledger of debtors and creditors of Andrea di Filippo Arrigucci for the years 1528-1545, probably written for his heirs. Often includes the nature of a given debt or credit and lists the names of the individuals that hold the credit or debt, the most important being Jacopo di Giocondi; Carlo Capponi; Lorenzo de' Medici; Alfonso di Filippo Strozzi; and Giovanni di Filippo Arrigucci. Most of the transactions concern debts or credits between Andrea Arrigucci and members of his own family, or members of other aristocratic Florentine families. These transactions appear to be mostly loans of variable amounts of money and in certain cases what appears to be interest is added to the initial amount over time. Debts and credits with employees and tenants are also present, but not as common. Memoranda, written in a more narrative tone, describe specific situations that lead to the creation of a debt or credit. 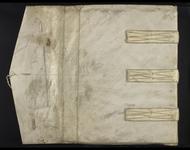