Ledger of accounts of the Gondi family for the years 1542-1618. Parts of it are written by Lorenzo di Mariotto Gondi, Antonio Gondi and Francesco di Lorenzo Gondi in the first person. Most transactions deal with the payment of rent, or the negotiation of said rent, between members of the Gondi family and the friars of the churches of Santa Maria Novella and Santa Maria degli Innocenti, two of the biggest and most important churches of Florence, which also often acted as hospitals and orphanages. The friars also appeared to engage in frequent exchanges of money with the Gondi family. These smaller transactions were probably loans. In the third section of the ledger, many friars personally write, sign and date short receipts that acknowledge the payment of variable amounts of money either from or to one or more members of the Gondi family. Memoranda, written in a more narrative tone, describe the circumstances that lead to the creation of a debt or credit. 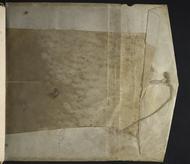