Ledger of miscellaneous accounts of Caterina Gondi (whose name appears throughout the ledger as Caterina nella Quiete o del Castello, these being two of the Gondi farms and country residences) for the years 1711-1713, probably written by the bursar or spenditore Francesco Padovani. The first part of the ledger contains a detailed list of expenses related to food and drink and records the amount of every transaction. All the foods that appear throughout the ledger are typical Tuscan foods and the most frequent are bread and cakes (including cantucci and a milk cake); pasta; meat (roast veal, pork and pigeon, geese, lamb, sausages, fried or fatty liver in various dishes, tongue, and larks); fish (salted or boiled cod, anchovies, sturgeon eggs, trout, mullet, and sole); fruit and vegetables (artichokes, asparagus, cherries, lettuce, porcini and prataioli mushrooms, peas, pink apples, chickpeas, pears, and figs); cheese (ricotta, parmesan, and sheep's cheese, both aged and fresh); salt, wine, eggs and sugar. Sometimes the dish for which the ingredient is purchased is also mentioned (for example, chickpeas to prepare a legume soup). The second part of the ledger contains more detailed, itemized accounts for the aforementioned expenses, and such records include the names of the counterparts, which were mostly farmers, bakers and butchers from whom produce and bread were purchased; for such accounts, copies of receipts of payments are also present. Accounts for expenses related to clothes, shoes and furniture also appear in the ledger, but not very frequently. 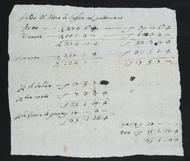 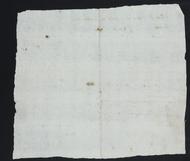