Ledger of credits and debts of the Medici family with Florentine and Pisan banks for the years 1611-1616. It consists of a detailed list of debts and credits of various members of the Medici family with a wide number of counterparts, both in Florence and Pisa. The Medici bank, which was run by members of the family, was one of the most powerful banks in Italy, and it was not uncommon for them to lend and borrow large amounts of money from other banks. These banks were also run by prominent families and the counterparts in the transactions that appear in the ledger are often members of other aristocratic families from Florence, the most important being the Capponi Medici (who had influence over the Pisan territory), the Gondi, the Acciaiuoli, Francesco Bernardo Riccardi and Carlo Paganelli. Another institutional counterpart that appears very frequently is the Monte di pietà of Florence. Very large single transactions, many in groups sharing the same settlement date, appear throughout the ledger.

Contemporary vellum; the heading Riscontro con li banchi, no. 244 and letter A with decorative penwork on upper cover; lower cover with remnants of leather ties wraps around upper cover. 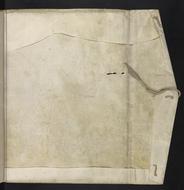 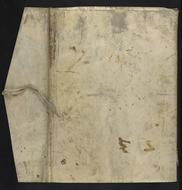