Ms. Codex 1565 The judicial and ministerial officie of coroner

The judicial and ministerial officie of coroner

Handbook for coroners concerning inquisitions, including a definition and qualifications of the position, instructions on how to hold an inquest, and forms in Latin to be issued by the court connected with various types of deaths. Abridged and rearranged from the section on coroners from William Greenwood's treatise on county courts, published under a variety of titles, including Authority, jurisdiction, and method of keeping county courts; Bouleuterion; Practical demonstration of county-judicatures; and Greenwood revis'd (first published 1659, 7th edition published 1703). Some text, perhaps a gathering, missing between first and second gatherings (between f. 6 and f. 7). The text on the last pages of the manuscript (f. 31r-36v) consists of definitions of various categories of homicide and felony, not copied from Greenwood but probably copied from another legal reference work. A sample form for a coroner's inquest, written by Davidson in regnal year 12 of George I (1725 or 1726), ruled in lead and written in ink, on a larger piece of paper formerly folded in the parchment pouch with the manual, is now unfolded and stored separately with the manuscript. 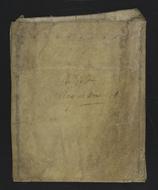 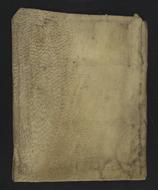