Ledger of miscellaneous accounts of Samuel Avery, a tailor, probably from Hartford County, Connecticut, covering the years 1773-1797. Often includes the nature of a given debt, credit, or other transaction, as well as listing the name of the individual who holds the debt or credit. Some of the names that appear throughout the ledger are those of Samuel, Andrew, Caleb, Simeon, General Ebenezer, and Colonel Joshua Huntington; Nathan, Benjamin, and Joseph Lord; John Perrit; and Joseph Gale. Most of the transactions consist of debts and credits for making, altering or mending clothes (in particular men's coats, in some cases as part of a military uniform), small leather goods, and shoes. The payment method (usually cash, but payments in kind were not uncommon) and whether the customer wished to pay in full or in installments were also recorded. Alphabetical index, with 12 lettered tabs in black and red ink, containing names of individuals that appear in the ledger, is shelved with the manuscript. 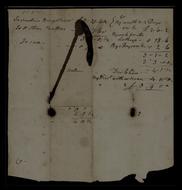 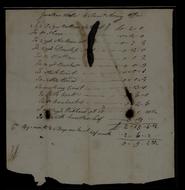