Written in France in the late 15th century.

Damaged illuminated book of hours with calendar including several feasts typical of Bourges (May 7, Translatio Sancti Guillelmi; May 20, Austregisilli episcopi; July 15, Liberatio Iherusalem; September 1, Lupi episcopi; September 19, Mariani monachi), Hours of the Virgin in the Use of Bourges, Brief Hours of the Cross, Brief Hours of the Holy Spirit, and the Office of the Dead. Multiple leaves missing, including probably seven large miniatures (Matins, Lauds, None, Compline in the Hours of the Virgin; Penitential Psalms; Hours of the Cross; Hours of the Holy Spirit), with loss of text in almost every section. Illuminations that are not missing are severely rubbed and water-damaged.

7 large arched miniatures with full foliate borders and three lines of text with a three-line illuminated initial on gold ground, all badly damaged (Nativity, p. 98; Annunciation to the Shepherds, p. 114; Presentation in the Temple, p. 125; Flight to Egypt, p. 139; Owner before Virgin and Child?, p. 210; Pietà, p. 222; Funeral with monks, p. 225); one full foliate border (p. 1); 1- and 2-line initials in gold on blue and pink ground and blue and pink line-fillers throughout; rubrication in red. 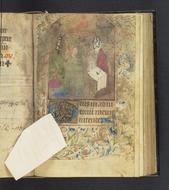