Papal diplomatic instructions and other correspondence

Mostly in Italian; some items in Latin

Volume containing copies of papal diplomatic instructions and other correspondence, mostly concerning the period 1570-1620. This volume appears to be volume four of a set. Concerns in particular the pontificates of Clement VIII and Paul V. Includes: instructions to Spain (1591); Hungary (1594-1596); Transylvania (1594-1595); Poland (1595); Republic of Venice (1607); Kingdom of Naples (1620); several relating to the war against the Turks (1570); negotiations with the King of Spain (1594-1595); and a letter of Cardinal Orsini about negotiations in France. Also includes a copy of a lengthy document dating to the pontificate of Eugene IV (d. 1447). Includes a table of contents at the beginning of the volume.

Contemporary vellum. Cover worn and split in places. Tom. iiii written on upper spine. Inside hinges weak. Various smudges and stains. A few indications of worm damage. Some damage to paper due to oxidation of ink. 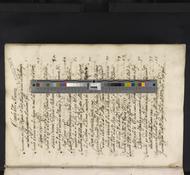