Manuscript is used for contemplation, study, and recitation and is a Hindu philosophical treatise that expounds upon the nature of the Hindu god Śiva, especially through his manifestation as the bilva tree. Work includes many mantras (words of phrases of power) dedicated to Śiva. Though named a upaniṣad it forms part of a group of medieval works and was often embedded into much larger, purāṇic texts. A textual fragment, verses in praise of Śiva, are on the back of the manuscript in a second scribal hand. 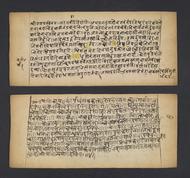