Stylized lotus diagram (yantra) for prosperity and used in ritual and prayer; likely to the Hindu god Gaṇeśa typically associated with the mantra Oṃ gaṃ found at its center; mantras dedicated to related deities such as Umā and Maheśa as well as mantras to Vedic deities such as Indra and Soma are placed throughout the diagram; contains an entire Sanskrit syllabary circling the lotus flower. 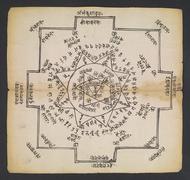 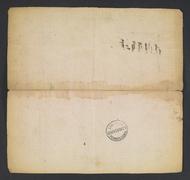