Śaiva yantra (Tantric diagram) to be used in private or public ritual or worship. Diagram depicts a many layered lotus flower (16 petals) containing mantras to various Hindu deities, including different forms of Śiva, such as Bhairava, and various goddesses or Yoginīs, such as Kaumārī who is one of the seven Matṛs (Mothers), in each of its petals. There is a six-pointed star in the center of the lotus. Diagram is framed by a square enclosure that has four portals signifying the directions. Each of the four directions (with the east indicated at top of manuscript) is marked by a different form of Śiva: Sāmbasadāśiva (east), Yama (south), Varuṇa (west), and Kubera (north). Sanskrit mantra: om̐ namo bhagavate śaktiyuktāyānaṃtāya yogapīṭhātmane namaḥ -- is repeatedly written along the bordered edges. 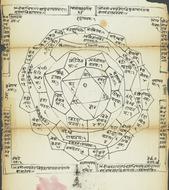