Praise of the Hindu deity Viṣṇu in the form of Govinda (a name for Kṛṣṇa) for the purpose of protection from despondence, which the text warns is caused by obsessing over the delusion of woman's beauty (such as seeing a woman's breast while at home in her bed) and the inevitability of old age, disease, and death. Text may function as a kind of commentary to or rearticulation of some ideas in the Bhagavadgītā, which contains similar and parallel pronouncements and is referred to by the manuscript (f. 2v). Mention is made of the Ganges river, sacred to Hindus and references to songs and singing. Ṭokarīya may refer to a town in the modern state of Gujarat. 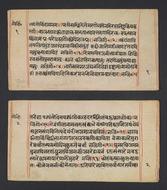