Manuscript is used for contemplation, study, recitation, and prayer, and some of its mantras and various other verses are possibly drawn from the Atharvaveda, although the text seems also to have been influenced by medieval Tantric traditions with speculations about the nature and status of divine feminine power, the Śakti. The work is of a quasi-philosophical nature and may be identified with some form of Śaivism although alluding to and styling itself after a late-Vedic upaniṣad. 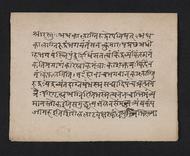 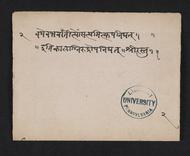