Fragments from a breviary, use of Sarum, from the sanctoral cycle, mostly comprising partial texts for the feast of Saint Mary Magdalene (July 22), but also containing brief passages from readings associated with Saint Wandragesilus (known in French as Wandrille), Saint Praxedes (July 21), and possibly Saint Margaret (July 20). The fragments are probably from 2 adjacent leaves, and were used as pastedowns for an unknown volume. Written in England in the 15th century, in 2 columns (66 mm. each) of Gothic script, with simple initials in either blue or red and rubrication in red. 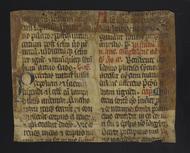 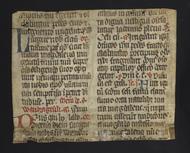 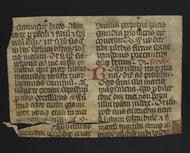 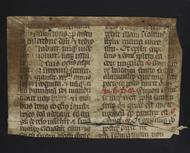