Two collages of manuscript miniatures on vellum, probably from a breviary in Northern France, possibly Rouen, in the late 15th century. Both feature a centerpiece of 9 panels with mostly Biblical pictures on them, with a piece of text on each side of the outer frame, with strips of illuminated borders around the edges. While it is difficult to tell the date these collages were assembled, this kind of specimen collecting reached its peak during the 19th century. The text comprises excerpts from the New Testament gospels, a calendar of feast days, and homilies of Pope Gregory I. The identifiable texts include Homilia XXI from Pope Gregory I, John 1.29-30, John 14.23, Matthew 9.18, Mark 16.1-2, and possibly Matthew 8.1-2 (in the form found in the Dominica tertia section of the Book of Obits). One of the unidentified texts refers to the bishops Julianus and Severus. The scenes depicted in the center of the collages predominately show Jesus blessing and teaching his followers, but also show the annunciation, the second coming of Christ, possibly the calling of Peter and Andrew, a figure wearing a mitre praying to an angel, and possibly the moneylenders in the temple. The illuminated initials have foliate decoration. Much of the surrounding decoration consists of sections of illuminated borders with geometric and floral designs and one dragon, using blue, green, red, white, gold, silver, brownish pink, and dark brown inks. Some of the flora is recognizable, including bunches of grapes hanging from vines. 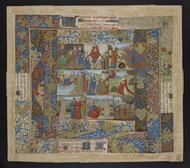 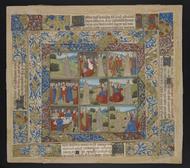