Collection almost entirely composed of financial documents concerning the business activities of the Sangalletti family (mostly Francesco and Guglielmo), for the years 1570-1583, with the exception of one legal document pertaining to a dispute involving the Cavaliere Sangalletti, dated 1609. Folders 1-6 contain a variety of accounts that concern different businesses in which the Sangalletti were involved, both in Florence and in Rome. In most cases, the name of Francesco Sangalletti appears together with those of Andrea Arrigucci and Francesco Guidacci, who were likely his business partners. These businesses included the sale and trade of textile products, money lending and exchange, and sale of farm produce. A small number of accounts also refer to expenses for household management of an unspecified farm or mansion. Many documents present contemporary foliation and were likely part of larger ledgers. The counterparts that appear in the documents were often members of aristocratic families, such as the Gondi and the Strozzi, but the names of less well known individuals are also present. Folder 7 contains an affidavit drafted by the legal representative of the Cavaliere Sangalletti that finalizes the division of the estate of the Cavaliere's late mother between him and his sister, Vittoria Sangalletti, after a lengthy dispute. 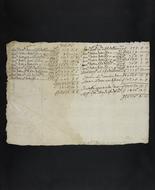 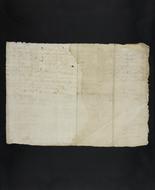 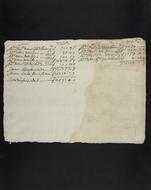 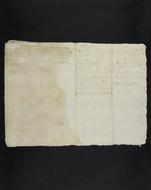