Illustrated medical manuscript, written and drawn by many hands, possibly multiple students. Some folds at the beginning of the manuscript repaired or reinforced with sewing; a multicolored cord is threaded through the first fold, probably to allow the manuscript to be hung vertically. Most of the text on the verso side is oriented to begin from the upper cover (f. 1v-11v), except for a folio in pencil that begins from the lower cover (f. 14v). 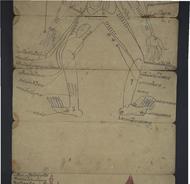 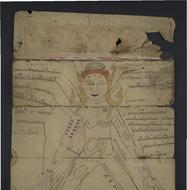