Commission of Thomas H. Cushing as Captain in the Second Sub Legion (the 2nd Infantry Regiment), as of 4 Mar. 1791, signed and dated 19 Mar. 1793. Signed by George Washington, President of the United States; Henry Knox, Secretary of War; and John Stagg, Chief Clerk of the War Department. An engraved form printed on parchment with information about name, rank, and date added by hand and with paper seal attached in the upper left corner. At the top is an engraving of the American eagle much as it appears in the Great Seal of the United States; at the bottom is a vignette containing weapons and flags and the statement Drawn & engraved by Thackara & Vallance, Philadelphia. Inscription in ink at the bottom edge of the verso: Cap. Cushing. 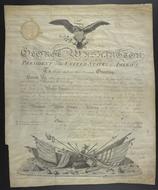 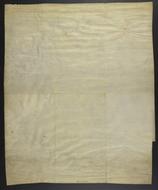