Home | Repositories | University of Pennsylvania Museum of Archaeology and Anthropology

Illumination cut from a folio of a Thai manuscript, showing farmers working and children playing by a river. The scene also includes water buffalo, fish, birds, two buildings, and a forest background. On the verso is text from the Phra Malai. 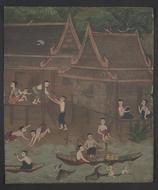 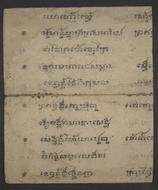