This legal compendium contains a large number of English statutes, laws, and ordinances issues from the reign of Henry III onwards, including Magna Carta (fols. 1r-3r), the Charter of the Forest (fols. 3r-4r), and the Assizes of Bread and Ale (fols. 47r-47v) among many others. The majority are in Latin, but some (such as the Manner of Doing Homage and Fealty on fols. 42v, the View of Frankpledge on fol. 46r, and the Oath of the Sheriff on fols. 46v-47r) are in Anglo-Norman French. Appended to the main text is an alphabetical index of statutes (fols. 90v-127v). The text of both parts has been glossed, annotated, and corrected throughout by a number of medieval and early modern hands. For the most part, this book is plainly decorated, with only one illuminated initial (beginning Magna Carta on fol. 1r). The openings of the remaining texts are marked by colored initials with pen-work flourishes in red and blue ink. Two eighteenth-century owners have inscribed their names on fol. 90r, and one on 91r. The nineteenth-century binding has become entirely detached from the body of the book itself, as have the front flyleaves.

Contemporary catchwords in ink on fols. 62v and 69v 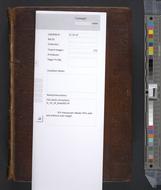