This manuscript is a late fifteenth-century processional with a binding fragment of an earlier astrological treatise pasted to the back board. 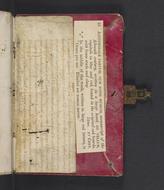