De quattuor virtutibus caritatis (On the four virtues of charity)

This manuscript is an eleventh-century copy of "De quattuor virtutibus karitatis" or "On the Four Virtues of Charity." This text and the other texts contained in the manuscript circulated in the Middle Ages under the name of Saint Augustine, but they have since been attributed to the fifth-century theologian Quodvultdeus of Carthage, who was a follower of Saint Augustine. The back Flyleaf 1 (fol. 48) is a fragment from a twelfth-missal with readings for the Eighth Sunday after Pentecost. The leaf was removed from its original book and reused by a later binder. The readings reflect an older liturgy that fell out of use in the later Middle Ages, rendering the missal useless and a good source for recycled parchment. 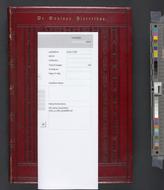