First half of the 15th century

This manuscript is a compilation of sermons, almost all by Augustine, copied in Germany in the first half of the fifteenth century. The first section of the volume is a group of sermons by Augustine that concludes with Cyprian's De mortalitate (attributed to Augustine in its rubric, with a correction by a somewhat later reader, fol. 72r). The second section of the volume is a second group of sixty-four sermons by Augustine, numbered and listed in a table of contents (fol. 74r-74v), on the gospels of Matthew, Luke, and John. These are followed by a longer work on the Sermon on the Mount (fol. 183v), a homily attributed to Bede (fol. 213v), and two more sermons by Augustine. Textual corrections by the scribe appear in the margins. Parchment tabs with decorative knots along the fore edge of the book mark the beginning of the first group of sermons; the beginning of the second group of sermons; the twenty-fourth sermon in the second group, on "Qui vos spernit me spernit"; the thirty-eighth sermon in the second group, on "In principium erat verbum" and against the Arian heresy; the work on the Sermon on the Mount; and possibly the homily attributed to Bede. Each of these, except the last, is also marked with a more elaborate decorated initial.

Original calf over wooden boards; blind stamped with diagonal lines; remains of clasps; labels on the spine with the numbers 48 and 89 and possibly the letter G 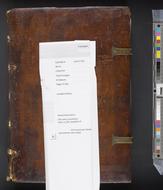