This manuscript is an early fifteenth-century copy, possibly from Germany, of the Manipulus curatorum (Handbook for Priests). 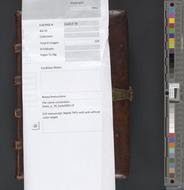