Lewis E 87 Book of Hours, Use of Bourges

Book of Hours, Use of Bourges

This manuscript is a compact Book of Hours of the Use of Bourges produced around the turn of the sixteenth century. The Hours of the Virgin are intercalated with the Hours of the Cross. Its miniatures have been excised, but every remaining text page has been decorated with a shaded gold border on the three outer sides, a blue cherub at the outer margin and two red seraphim above and below the text respectively. The lower pastedown contains a signed ownership note by the prominent Bourges patrician and book collector Jean Lallemant the Younger (d. 1548), dated to July 12, 1544. This has been taken erroneously as the date of the book, which is in fact significantly earlier.

Margins of each gold-framed page decorated with two red seraphs and one blue cherub, eleven illuminated initials, red and blue line-endings for the Suffrages, alternating red and blue rubrics and initials throughout 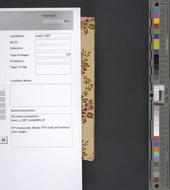