Lewis E 89 Book of Hours, Use of Châlons

Book of Hours, Use of Châlons

Use of Châlons, as currently listed for this book, is likely erronenous: the particular combination of Aniphons and Chapters in the Hours of the Virgin is equally valid for Mons, Belgium, and the litany includes two saints, Ghislain (fol. 94v), and Waltrudis, (fol. 95v), closely associated with this diocese; circa 1400

This well-used Book of Hours of circa 1400, previously catalogued as being of the Use of Châlons in the Champagne region, is more likely identifiable as being produced in the diocese of Mons, as its litany includes saints Ghislain (fol. 94v), and Waltrudis, (fol. 95v). The book was owned in the 17th century by the Jesuit College at Louvain, bolstering the Wallonian provenance. The book lacks a calendar but appears to be otherwise intact. There are French prayers added in another hand on folios 144r-160v. 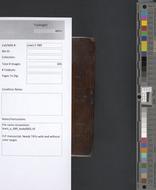