This is a collection of offices, followed by seven short unidentified texts.

Original blind stamped calf over wooden boards, with unusual stamps of a running hound and the evangelical lion of Saint Mark on the top cover, with clasp, in maroon morocco case

Capitals in red and blue; musical staves and rubrication in red 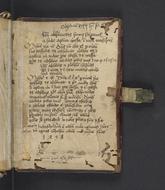 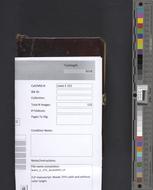