This manuscript contains the Latin text of Petrus Comestor's biblical paraphrase, the "Historia scholastica" (fols. 1r-214v). It includes tables of contents for each book of scripture covered, as well as marginal glosses in near contemporary and later medieval hands in both drypoint and ink. The body text is helpfully annotated with running headings and chapter numbers, and this book also contains medieval foliation in ink. Catchwords and signatures are also consistently applied. Decoration is limited to colored initials of varying sizes in red and blue, most with pen-work flourishes. In the margin, the scribe has included small letters indicating where initials and chapter numbers were to be painted. Throughout the book there is evidence of historic damage and repairs, which on fols. 77, 102, 103, and 153 takes the form of colorful decorative stitching. This manuscript may have belonged to the Cistercian Abbey of Royaumont before the French Revolution.

Large and small ornamental capitals with marginal penwork tracery in red and blue; rubrication and paragraph marks in red 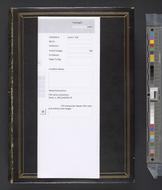