This Pontifical was made in the north of Italy, perhaps in the Veneto, circa 1420. The text follows William Durandus's late thirteenth-century Pontifical closely. He is mentioned in the rubric on fol. 65v. It includes a number of French saints in the Litany including Denis, Hilary, and Martial, but most notably Saint Privatus, dedicatee of Mende Cathedral where Durandus was bishop. The book is missing some leaves, noticeably the first leaf from the table at the beginning of the text (preceding fol. 1) but also after fol. 65v, where the catchword "Secunda" is not repeated on fol. 66r. The body of the text is heavily rubricated and is enlivened by numerous colored initials with pen-work flourishes and hundreds of illuminated initials with foliate decoration. There is also musical notation, in the form of four-line staves with neumes. Remarkably, this manuscript preserves its original fifteenth-century binding. The inside front cover contains scribal pen trial initials in red and black ink.

One hundred and three very fine ornamental initials in gold and colors, with bright blue predominating; other initials in red and blue with some penwork decoration; rubrication, underlining, and stave lines in red 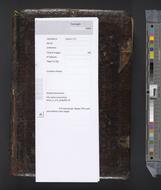