This combined Psalter and Book of Hours, written in Dutch around 1450-1465, has been divided into two volumes at a later date (likely in the late seventeenth or early eighteenth century). The Psalter, arranged for fortnightly reading (fols. 12r-193v), is the translation begun by Geert Groote and completed by Johan Scutken (d. 1423). The Psalter, with early numerals added in the margins, is followed by the Canticles and Litany, and Augustine's prologue to the Psalms. There follows the Hours of Eternal Wisdom, the long Hours of the Cross, the Office of the Dead, and the unusual Hours of the Pentecost. A single folio with instructions for use has been added in a contemporary hand (fol. 281). The seven miniatures included in this manuscript (only one of which is in the first volume) were painted by one of the few Netherlandish illuminators for whom we have a name: Antonis Rogiersz Uten Broec, who was mainly active in Utrecht in the 1450s and 1460s. All seven miniatures have panel border surrounds and are blank on their recto sides. 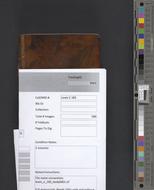