This manuscript, written on paper in Germany, is a glossed psalter which has had other devotional texts added to it. The psalter itself, which has marginal and interlinear glosses, is written in Gothic cursive and has a colophon dating it to the 1430s [fol. 125r]. The psalms are followed by the Canticles, in the same hand but mostly without glosses. Slightly later additions in hybrida script at the beginning and end of the volume, before and after the Psalms and Canticles, include prefatory material for the Book of Psalms, arguments (or synopses) of some psalms, prayers for the Office, sermons on the Virgin, and standard prayers such as the Pater Noster and the Apostles' Creed.

Colors other than red mostly seem to be later additions, including one small illustration of David with crown and harp (fol. 5v) and a large decorated B at the beginning of the Psalms (fol 6r); two-line red initials and initials stroked with red throughout; some marginal lemmata stroked with red 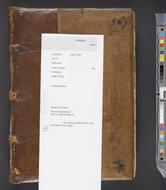