This paper manuscript was made in Germany in the early fifteenth century. It contains a complement to the unfinished third book of Thomas Aquinas's Summa Theologica made by a "Reynoldus Romanus" (fols. 1r-308r) complete with table of contents (fols. 309r-312v). A parchment tag has been added to fol. 309 for easy reference to this index. The text itself is simply adorned with colored capitals in red ink, one of which has been embellished with pen-work flourishes (fol. 1r). This manuscript retains its original medieval binding, including metal bosses on the front and back covers and a three-link chain which would originally have prevented the book from being removed from its library. The fifteenth-century binding incorporates fragments of two twelfth-century manuscripts, as paste-downs inside the front and back covers and as guards at the mid-points of quires. Most of this material comes from a liturgical manuscript, the visible texts of which can be identified as parts of the Psalms, the Book of Isaiah, an antiphon for the feast of Saint Brice, and Saint Maximus of Turin's homilies for Epiphany and the feast of the Baptism of Christ. The second recycled twelfth-century manuscript (fragments of which are used as guards after fols. 18, 30, and 42) contains at least part of Book XII of Priscian's Institutiones Grammaticae. A mid-fifteenth-century owner, Johannes de Helb, has inscribed his name inside the front cover. Helb was vicar of the church of Saint Laurentius in Ebern (Bavaria) in the middle third of the fifteenth century. He built a chained library to house his collection of sixty-four books, which still stands adjacent to the church and from which this manuscript almost certainly comes.

Cross on a base, similar but not identical to Briquet 5645 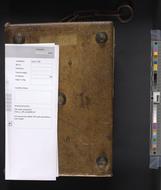