This manuscript is a copy of a didactic work by Jean Germain, bishop of Chalon-sur-Saône in Burgundy, the text originally written in 1457. It illustrates the progress of the Church. The text describes in five parts a planned tapestry showing biblical and allegorical figures pulling a wagon bearing the Church Militant and explains their meanings. Six double-page watercolor illustrations of sections of the tapestry accompany the text, with an illustration for each part plus an extra illustration for the fifth part. The text is in Middle French, except for prayers in Latin, and written in bâtarde script with the first line of each chapter in textualis quadrata; the heavy ink of these display letters has damaged several leaves due to oxidization. Occasional corrections have been made by crossing out words or phrases in red. The first leaf of the table of contents is missing, and there also seems to be text missing in the fifth part (following fol. 175).

Horizontal catchwords in ink, lower right last verso, underlined or boxed; the last catchword (fol. 175v) does not match the text that follows it

Six double-page watercolor illustrations on parchment, depicting the procession of the Church Militant and interspersed to correspond with appropriate sections of the text; six large decorated initials in red, blue, and yellow at the openings of the first two parts (fols. 6r, 42r); large initials in red at the beginning of the remaining parts (fols. 94r, 108r, 142v); smaller decorated initials in red at the beginning of each chapter; eleven small figures drawn within ascenders; rubrication for chapters in red; initials touched with yellow 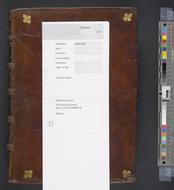