This manuscript on paper is a copy of sermons on the Epistles by Matthias de Liegnitz, professor of theology at the Univerzita Karlova in Prague. After a brief introduction, the sermons are arranged according to the liturgical calendar, with rubrics from the Sundays of Advent through the Sundays after Trinity Sunday. The text is written in Gothic cursive script in two columns, with one decorated initial at the beginning and rubrication throughout.

Similar to Briquet Cloche 3959-3983, similar watermarks appearing in northern Italy, Germany, Holland, and France throughout the second half of the fourteenth century and the first quarter of the fifteenth

Six-line decorated initial (fol. 1r) with first five lines of text in double-height textualis semi-quadrata; three- or four-line initial in red at the beginning of each sermon followed by one line of textualis script; rubrication, paragraph marks, underlining, and initials touched in red ink throughout; occasional nota marks including one manicule (fol. 17v) in red ink in margins and one decorated ascender incorporating a drawing of a fish (fol. 88v) 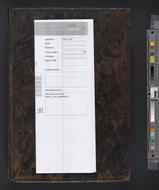