This manuscript is a fifteenth-century copy of a fourteenth-century Latin treatise on the Passion of Christ, considered in sixty-five articles, by the Augustinian Hermit Jordan von Quedlinburg. The text is written in Gothic cursive, with the beginning of each article marked by a two-line initial in red ink. The articles are followed by a list in the same hand of brief synopses of the sixty-five articles, each article beginning with an initial in red (fols. 76r-81r), and a table of contents of the sixty-five articles with early foliation references (fols. 81v-82r), in a slightly later hand, possibly same hand as the early foliation.

Two-line initials in red, at the beginning of each article; initials touched with red throughout 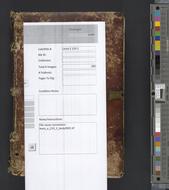