This antiphonary contains the liturgical texts for the annual cycle of saints' feast days, beginning with Saint Andrew and ending with Saint Clement (fols. 1r-179r). It also includes antiphons for the feasts of Saints Peter and Paul, the Chair of Saint Peter, and Saint Lucy (fols. 179r-183v). The colophon (fol. 318v) tells us that the book was finished in June 1548, and paid for by King John III of Portugal for "this college" and names the rector as Blaise D'Olivença. The college to which this book (along with Free Library Lewis E 222-234) belonged is understood to be the Jerónimos Monastery in Belém, Portugal, which was still under construction at the time these manuscripts were made. The text itself is embellished with a large number of colored initials with intricate pen-work decoration, as well as one historiated initial showing Saint Jerome (fol. 151r) and an illuminated initial with a full panel border (fol. 1r). In the bottom part of the border of fol. 1r are a cardinal's red galero and a lion, symbols associated with Saint Jerome, patron saint of the Jerónimos Monastery. The text of this manuscript has, in places, been erased, corrected, annotated, and doodled upon. Many of its folios bear evidence of paper and parchment tabs stuck down for easy reference to important texts. The parchment has been patched and repaired throughout, including on fol. 1 where some of the roses from the border have been excised. Inside the front cover of the eighteenth-century binding is an index of texts contained within the book, written in pencil in a later hand.

One historiated initial with Saint Jerome kneeling before a crucifix (fol. 151v); one illuminated initial (fol. 1r) with full panel border; numerous black and colored initials of varying height with pen-work decoration throughout 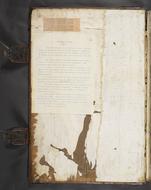