This antiphonary contains the lessons and other texts for the Divine Office to be read on regular Sundays and special Sunday festivals, beginning with the first Sunday of Advent. It is embellished with one large illuminated initial on fol. 1r, complete with an all'antica panel border, and numerous black and colored initials of varying heights with pen-work decoration. Throughout, the text has been corrected and annotated by later hands. In places, the text has suffered damage through flaking; elsewhere it has been deliberately erased. Many of the folios have been severely trimmed and some have been extensively repaired. There are remains of paper and parchment tabs in the outer margins of some folios, which perhaps served as place-markers for important texts. The original parchment of fols. 4 and 5 has been replaced entirely with paper, but the script appears to be roughly contemporary with the rest of the book so this may be an early repair. Along with Free Library Lewis E 221-234, this manuscript was given by King John III of Portugal to the Jerónimos Monastery in Belém, Portugal, in June 1548 (colophon on fol. 163v).

One illuminated initial with an all'antica panel border (fol. 1r); numerous black and colored initials with pen-work decoration, some extending into marginal drawings of birds (fols. 114r and 134r) 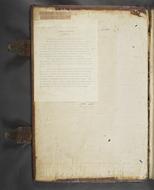